As requested, this is the first part of the crochet pattern for the Occamy from Fantastic Beasts and Where to Find Them. I’m splitting the pattern in half as there are a few fiddly bits that deserve their own posts. 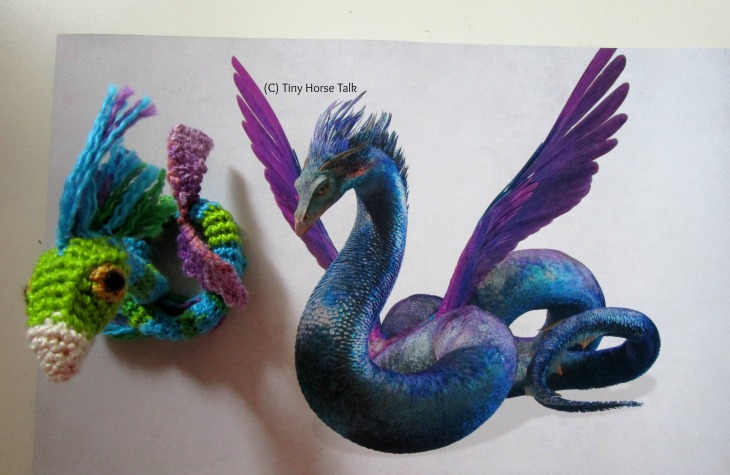 NB. This is a small and fiddly pattern, so if you are eyeing this up as a first crochet project, I would suggest you find a few larger projects to do first before coming back to this.

Notes
This project is made using the amigurumi technique, crocheting in a continuous spiral instead of joining at the end of each row. It is also in UK crochet terms, and a quick Google search can find a conversion table for UK/US terms.

Eyes (make 2)
With gold yarn, 6dc into magic ring. Sl st into 1st st and fasten off. Sew to side of head just under ridge with tail of yarn. Cut very small circle of black felt and glue in centre of eye.

Body
Using blue, 6dc into magic ring.
Rnd 1: *1dc, inc into next st* around. (9 sts)
Rnd 2: 1dc into each st around. (9 sts)
Repeat rnd 2 working up the pipe cleaner, changing between blue and the various shades of green randomly to create green ‘sheen’. Stop at base of head with blue and sl st to base of head.

Crest and Tail
Cut 5 9cm lengths of yarn in blue, dark green and dark purple. Use your hook to pull the lengths through the blue sts on top of the head, securing in place by putting the ends through the loops you pull through. Trim along line below:

Repeat for tail, working around and up the tip slowly. Use the tail of the magic ring in the tail.

You can also tease the yarn if you like, as I’ve done here, but it’s not necessary.

Part 1 complete! If you have any questions about the pattern, or parts that don’t make sense, or you’ve made your own Occamy using this, please comment, I’d love to hear feedback. Please don’t sell this pattern or make Occamies from this to sell, it’s just for fun – and a beautiful friend for your shelves. Part 2 will cover making the wings and general finishing.

Lover of all things tiny, model horse collector, reader and crafter for life! View all posts by filliefanatic